There were two security levels: one for each object, and one for a user. As long as the user security level was greater than or equal to the object security level they could see that object on the query panel. It wasn’t very flexible, but useful in certain cases.

Object level security is to hide (not to show the particular objects in Query panel) the some of the objects to Particular end users. You can select a security level which restricts use of the object to users with the appropriate security level. simply specify an access level for each object within a universe. Only groups/users that have access level equal to or higher than that level gain access to that particular object. 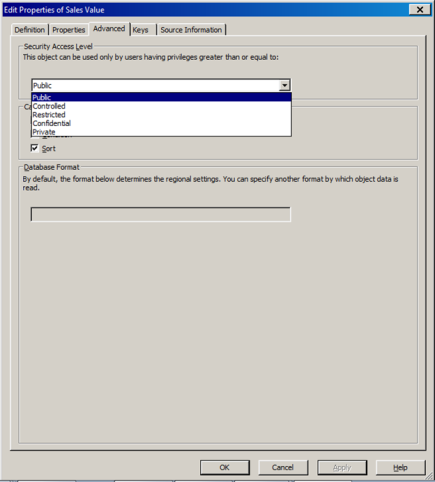 The settings were public, controlled, restricted, confidential, and private. These are just a place holder for the developer perspective and the values were stored in from zero (0) to four (4) in repository. As long as a user had a security level that was greater than or equal to an object security level, that user could see that object.

If your Object level security for that universe is Private, you can see all the objects. if you have Public for that universe then you could not see the other 4 restricted (controlled, restricted, confidential, and private) level objects
By default all objects are set to Public, if you need any specific security, then it has to be set for each object in object properties.

Once all your objects security has been set in universe designer, then you need to create groups (controlled, restricted, confidential, and private) in CMC and have to add the users to the respective groups and assign the access level.

Please feel free to pass on your comments.

This site uses Akismet to reduce spam. Learn how your comment data is processed.